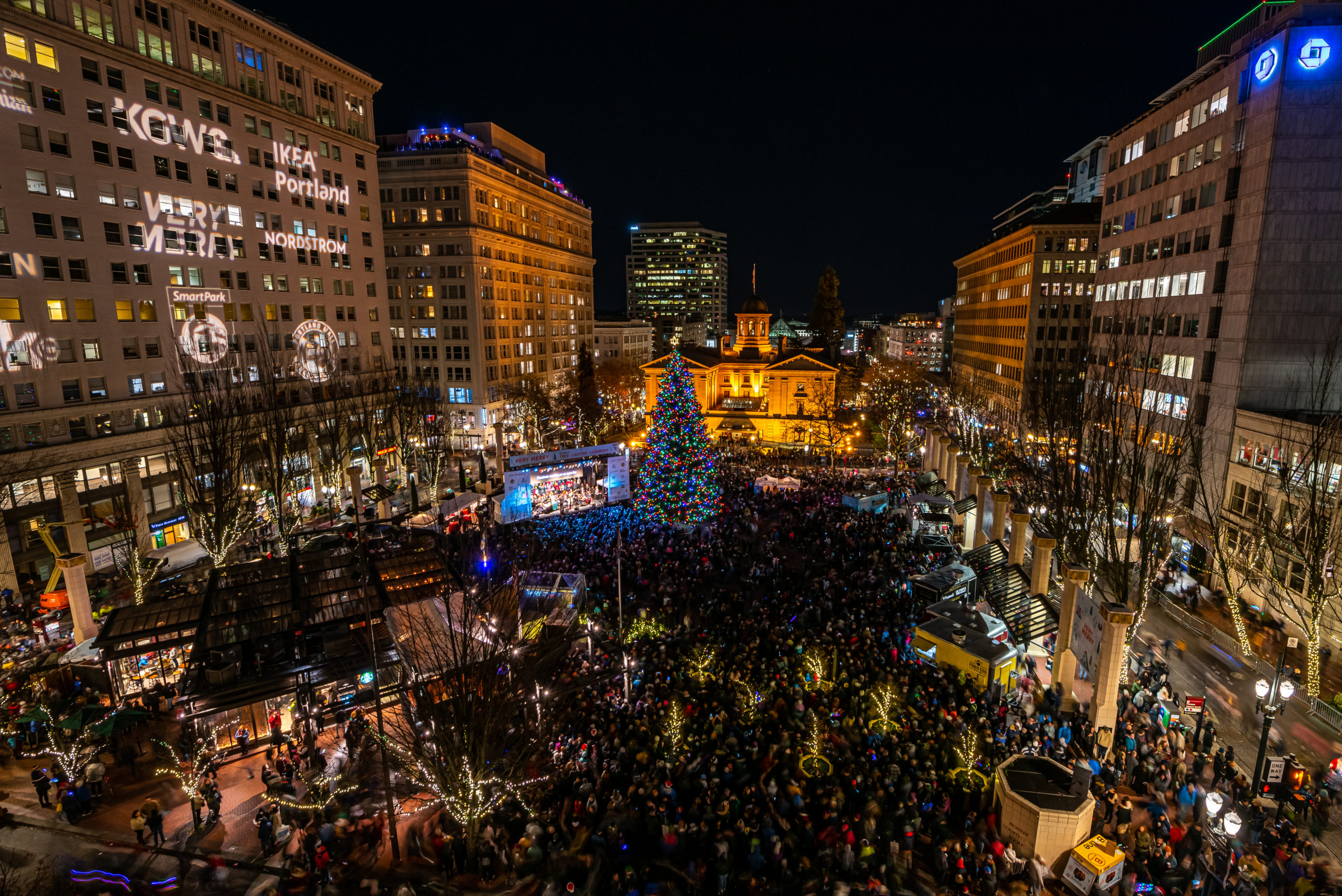 The sidewalks in downtown Portland are illuminated with twinkling lights, Santa has taken up part time residency at the downtown Nordstrom and the window displays have transformed from fall to winter. In the heart of it all, Portland’s 75 ft. Douglas-Fir Tree generously donated by Stimson Lumber was ceremoniously and spectacularly lit last Friday during the annual Tree Lighting Ceremony presented by SmartPark. The holiday season is now in full swing in the heart of downtown Portland!

For the 35th consecutive year, over 20,000 community members gathered in and around the Square the day after Thanksgiving to witness the city’s Tree come to life as over 14,000 multi-colored LED and twinkle lights were lit. Thomas Lauderdale, China Forbes and members of Pink Martini, along with, Franklin High School Band, Grant High School Royal Blues, “Oregon’s Own” 234th Army Band and the Pacific Youth Choir led the crowd in a joyful sing-a-long leading up to the lighting of the remarkable 75 foot Douglas-fir. For the first time ever, Portland’s largest community sing-a-long featured a 5.5’ X 20’ LED screen made possible by Really Big Video which displayed song lyrics in real time while a red bouncy ball helped the crowd follow along.

As is tradition, Portland Mayor Ted Wheeler, Santa, and local students from area schools had the honor of “flipping the switch” and illuminating the thousands of lights adorning the city’s Tree. The spectacular lighting of Portland’s tree was broadcast live to 75,000 people on KGW’s 6:00 PM news and digital livestream while the crowd in the Square gleefully belted out Feliz Navidad among other holiday tunes.

Portland’s beautiful 75 foot Douglas-fir, donated by Stimson Lumber, will be on display for our entire community to adore throughout the holiday season and into the new year. Stop by the Square in the weeks ahead and enjoy a delicious lunch from the Carts on the Square or a warm festive beverage from Oregon’s Flagship Starbucks while you take in the sight of our city’s centerpiece to the holiday season!